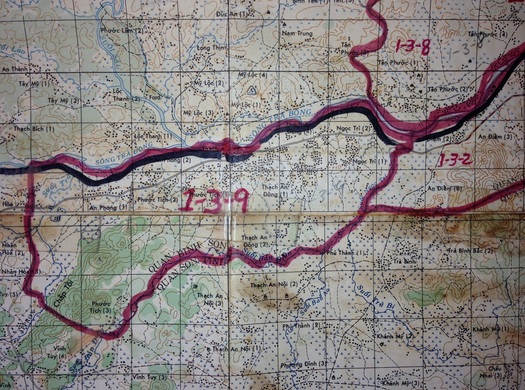 September 12, 1969, 11 Marines and one Navy Corpsman, known collectively as Combined Action Platoon 1-3-9 (CAP 1-3-9), along with approximately 35 Popular Forces (local militia), were attacked by the 6th Battalion of the 21st NVA Regiment.

CAP 1-3-9 was reinforced with air and artillery throughout the night and with three Marines after daylight. Other reinforcements arrived later but the fighting was essentially over at that time.

The 11 Marines and Navy Corpsman of CAP 1-3-9 won a Navy Cross, two Silver Stars, five Bronze Stars with Combat Vs, four Navy Commendation Medals with Combat Vs, and two Purple Hearts for leading the fight against the 6th Battalion and getting 116 confirmed KIAs.  The CAP lost one Marine, the corpsman, and eight Popular Forces.  Two Marines on the reactionary force that arrived after daylight also received Silver Stars and the third member of the reactionary force was wounded.

The CAP was presented the Meritorious Unit Commendation for its actions.

I have researched this at length, and this battle is, as best I can tell, produced the single greatest number of KIAs by any CAP in one night in the six year history of the Combined Action Program. Unfortunately, this battle isn’t mentioned in any histories I've ever seen of the Marine Corps in Vietnam, official histories included.

This link provides info on the battle, including command chronologies, DOD photos, a book written by Reggie Childs (one of the Marines who fought in the battle), and a history of the CAP.  Here are a few other related links of interest:

I would greatly appreciate it if any of you can provide info as to how I can get this battle formally noted in the official Marine Corps records.  It was a noteworthy action and should be formally documented.

To keep the record straight, I was not in the battle but did arrive in CAP 1-3-9 two days later.

Thanks and Semper Fi.