It was five days after Love Day (D-Day) and the 1st Division was given orders to march across Okinawa and occupy the Katchin peninsula. The peninsula was about a two day hike, and for the most part, our travels went smoothly and without opposition. Our unit, Charley Company, arrived at our designated point on the peninsula, overlooking the ocean. We set up our position and awaited further orders.

We were in a tiny village with no more than 8 or 10 paper-walled houses. All the civilians were long gone, so there was little else to do but stand watch and make ourselves comfortable. The only living things we could see were a couple of scrawny-looking chickens … but therein lies the story of Charley Company's "chicken roast."

I was a Squad Leader and in my Squad I had a variety of Marines from all across the States, including an Apache from New Mexico, a kid from a Chicago Mafia family, a New Jersey politician, a Kansas farmer, myself (the New Yorker) and last, but not least, a very likable guy who we called "Arky" -- a genuine, down-home Arkansas hillbilly. We were dining on C-rations (which were OK, because they were better than the K-rations which barely kept you from starving!). Still, C-rations weren't gourmet food, and when Arky spotted one of those chickens, he announced to the Squad that we were going to enjoy a roasted chicken (which, he allowed, was better than C-rations, even without the traditional accompaniment of grits and gravy).

In the blink of an eye, Arky had one of those birds plucked, dressed and ready for cooking, but by now it was getting late in the afternoon and if we were going to roast it, time was of the essence. Lickety-split, Arky had a fire going and began to roast his culinary delight. (I have to admit it didn't look too appetizing, but it sure smelled pretty good!)  By then the sun was setting, and so the "all fires out" rule kicked in. Unfortunately, Arky's bird wasn't quite done, but he had to douse the fire anyway. The fact that it wasn't fully cooked, however, did not deter Arky. He took the half-done bird, stuck it on the bayonet of his rifle, and covered it with his helmet, awaiting morning's first light when he could resume his slow-roasting vigil. 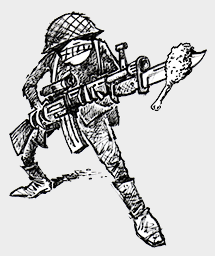 At the crack of dawn Arky was back at it, with his fire crackling and his bird cooking once again. He was quite a character, with a weird sense of humor and a penchant for odd sayings like "Never saw such a good time back home -- let's pray for a long war!" Apparently he had a penchant for well-done bird, too, as the chicken carcass slowly went from shades of brown to various shades of black.

Finally, the word came down: "We're moving out!" Arky, still not satisfied that his fowl was fully roasted to his liking, stuck the carcass back on his bayonet and fell in. We marched all morning with that mangy bird firmly skewered on Arky's bayonet, proudly held high above the Squad for all to see. Around noon we stopped for a chow break, and Arky pleaded for permission to start another fire to finish cooking his gourmet C[hicken]-rations. Our Lieutenant, who was normally a very patient man, had by now had enough of this nonsense and ordered me to have what was now a stinkin' mess of burned bird disposed of immediately.

I went over to Arky to report this development and he said, "Dreves, I've worked hard for this meal and I'm gonna eat me some. You wanna try a bite?" I said, "no thanks, I'm not in the mood for something that looks more like Chicken Jerky." Deflated, Arky removed the bird from his bayonet, took one big bite out of it and dutifully threw it on the side of the road, mumbling something about how hard it was to please those damned Yankees.

Within a few days we were on the line in an intense battle for another piece of Okinawa real estate and it was there that my trusty Arky gave his life.

To this day, even as other memories of the Battle for Okinawa begin to fade, I will always vividly remember that stinkin' chicken, carried high on the bayonet of that Arkansas hillbilly. Wherever Arky is, I hope he's enjoying the Ultimate Chicken Roast he worked so hard to deliver to the First Squad, First Platoon of Charlie Company, First Battalion, First Marines, First Marine Division.