It was March, 1945, and the 1st Marine Division was aboard the transports, leaving Pavuvu, in the Russell Islands, for the final time.  Pavuvu had been the home to the 1st Marine Division between campaigns, and it was bittersweet to say farewell to that beautiful tropical resort (although "resort" may be overstating the accommodations!) At any rate, we were off to a new part of the world, and ultimately, to some of the most intense combat we would encounter during the War.

A six-day sea cruise took us to Ulithi, an atoll in the Caroline Islands with a large lagoon, well suited for anchorage (this, we would later learn, was the principal staging area for the U.S. invasion of Okinawa). It was here that we witnessed an amazing piece of U.S. Naval History, up close. After sailing for the better part of a week, we must have pulled in to the anchorage overnight, because when I went topside in the morning for chow, as far as the eye could see, there were nothing but ships -- ships of every class the Navy had in its arsenal -- a thousand ships, it seemed to me (though recorded history says there were only 617).  Still, it was clearly one of the biggest armadas ever assembled during the War.

At some point, they wanted to move our craft to a different location in the lagoon.  I don't recall exactly why we had to change our anchorage, but we moved very slowly through that sea of ships, and thus occurred our encounter with a great warrior of Naval history.

We were probably doing about 5 knots when the public address speaker came on, and called for all hands on deck -- that meant Marines, too.  We were called to attention and told to face the starboard side. There she was -- the USS BEN FRANKLIN -- still smoking, with a bad list to starboard. We could see immense wreckage -- burned aircraft, stacked on the stern, and a huge, gaping hole in the flight deck, about mid-ship.  All hands on our ship were given the order to right-hand salute. 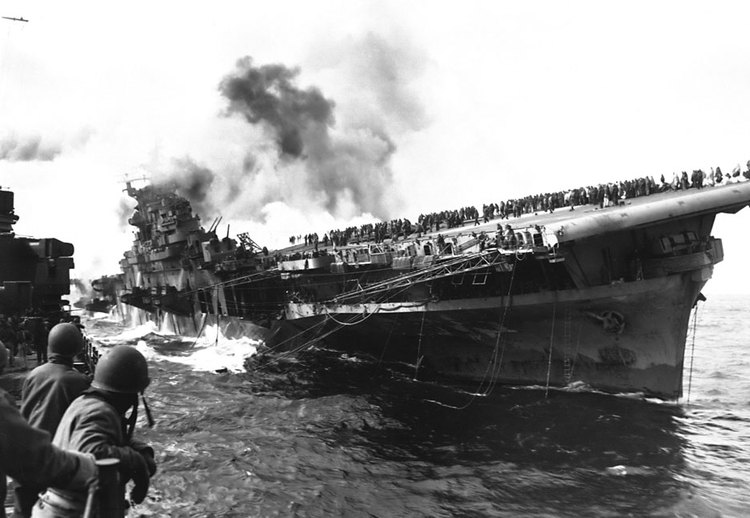 This was roughly our view of the Franklin as we pulled alongside her.

Then came the most vividly memorable moment. There were at least a half-dozen shrouded bodies laid out on the edge of the deck, and a small squad of Marines with rifles at port arms.  As we slid by, the command for a gun salute was given, and the shrouded bodies were slipped into the sea -- a most moving event, and one I will never forget.

The Franklin, we learned, had taken two direct hits from a Japanese dive-bomber a few days earlier; this was actually the second time she had been hit by the Japanese -- the first being six months earlier -- but this time, the damage was far more severe.

By all rights, the Franklin should have sunk.  It took on so much water, it was listing 13 degrees; it was heavily damaged internally; and a majority of its crew were killed or injured -- but the tenacity of the Franklin's remaining crew refused to let the ship die.

We were honored to see her that day, the day she began making her way home to the States.  As history records, after initial repairs at Pearl Harbor, the USS Ben Franklin made the rest of the journey under her own power -- halfway around the world, and all the way back to the Brooklyn Navy Yard.  She remained a proud part of the U.S. Navy until 1967, when she was finally taken for scrap-metal.

As for us -- our fortunes took us in a different direction, departing Ulithi a few days later for what would be our April 1st, 1945 landing … on the Japanese island of Okinawa … but that is yet another story.