Once You've Read It, You'll Never Forget It. 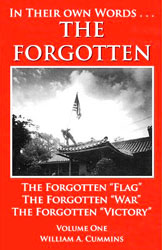 How quickly we forget our heroes... those who daily risk their lives for our freedom. It is difficult to imagine the anguish, the determination and yes even the fear, in the heart of a man driven by enemy fire into a fox hole. How do you capture in words the feelings and thoughts of soldiers under attack by the enemy?

UP CLOSE AND PERSONAL:  William A. Cummins has met that challenge with this remarkable book titled, THE FORGOTTEN as he unveils a series of stories by Korean War veterans depicting their combat experiences in their very own words. Battlefield experiences from a war that must never be forgotten. You will follow a 19 year old PFC Marine from his sharecropping youth in Ohio to a brutal battlefield ambush in Korea and finally to a pulpit in Florida.

Dozens of stories and photographs of our unsung heroes provide a written witness to the nearly three million people who perished during that horrific three year war. Each veteran expresses in his own words a small fragment of himself during the war for his children and grandchildren to read in a book.

Hailing it as "the best book about Korea they have ever read," veterans are jumping aboard THE FORGOTTEN book bandwagon. Cummins has skillfully unveiled a series of untold stories from Korean War veterans, depicting life and death combat experiences in their very own words.

WILLIAM A. CUMMINS lives in Port Orange, Florida, USA. He grew up in Ohio with four brothers. By age 18, he was a professional horseman and entertainer. Deferred by an injury, he stood by as three brothers served in the Korean War. During the next 45 years, he married, raised a family, worked as a professional engineer, and became a church leader. Today he is an author, publisher, speaker, and independent marketing consultant offering his services worldwide.

When you purchase a copy of THE FORGOTTEN via this website, a portion of the proceeds benefit the Central Florida Chapter, 1st Marine Division Association.