Walking through the Orlando airport recently, the strap on my suit bag was cutting into my shoulder. The sharp pain caused me to perform a stop and shift maneuver that was reminiscent of the same procedure used frequently during the long all night forced march from Topyong-Dong to the village of Chachon-dong on the 29th of January 1951, while serving as a Private First Class with Charlie Company, 1st Battalion, Fifth Marine regiment, 1st Marine Division during the Korean War.

We had shipped out of Masan, Korea on an LST with a base plate marked 104 and built by the Jeffersonville Boat and Machinery Company on the Ohio River across from Louisville, Kentucky. We landed at the Port of Phohang after spending two days at sea. This was one of the LSTs that I helped build in my home town in the summer of 1944 before my senior year in high school. The members of my platoon had to bunk on the corrugated deck of the ship usually reserved for tanks. I knew every hold in the ship as it was my job as a member of a labor gang to clean out all ammunition and water storage areas before the steel welded compartments were buffed and painted before the ships went to sea. I led some of the second platoon Marines to a more comfortable place to bunk on metal racks in one of the ammunition holds.

Our mission that evening was to arrive at the village of Chachon-dong before sun-up and develop a perimeter around this small village without being discovered, and ambush and stop a battalion of North Korean guerrillas that our intelligence found to be scheduled to ravish this small village for food, clothing, and kill anybody that would stand in their way. We jumped off near Topyong-dong after sun down in a staggered company formation, and we were loaded to the hilt as a Marine rifle company headed for combat. Our uniform was heavy parkas with our winter boots called shoe packs with leather tops and rubber bottoms featuring removable felt inner soles. Our field packs were heavy with two days of C-rations and all the clothing a combat Marine rifleman owns. The heavy sleeping bag is wrapped in our half shelter, and tightly strapped in a tight roll to the top and sides of our field pack. Also have a loaded cartridge belt plus two extra bandoleers of additional ammunition, four hand grenades plus my very reliable Garand M1 semi-automatic rifle. We wore our steel helmets with the camouflaged covers that identified the United States Marines from the United States Army. Our formation was led by our company commander Captain Jack R. Jones. His presence always seemed to give Charlie Company a feeling of strength and confidence. His physical appearance reminded me of Doc Blanchard the Army fullback that I saw help beat Navy in 1945 at Municipal Stadium in Philadelphia while attending Naval Academy Prep School at Bainbridge, Maryland, after my boot training at Parris Island. Sometimes during this forced march his vigorous stride caused the rear of our 200-man formation to double time in order to keep pace.

My position at this mission was runner for the second platoon and was in the middle of this long column working under the direction of Gunnery Sergeant Owens. He was definitely from the "old Corps". His craggy face, and his raspy voice resembled Leo Durocher of the Brooklyn Dodges fame, and you could tell that he had been in many bar fights as well as combat encounters in WWII, Inchon and the Chosin. The Gunny was an old man among boys. The Gunny is the heart and soul of a Marine rifle company, and Gunny Owens was no exception, but like Leo Durocher he had that special ability of making every bad situation immediately worse. After about four hours into the march, with periodic five-minute breaks every hour or so, it became evident that my training at Parris Island and Camp Pendleton was child's play compared to this mission. As the night progressed, the pain from the field pack straps and the rifle sling became almost unbearable. My problems were not nearly as bad as those carrying machine guns and the Browning automatic rifle. My legs felt weak from the weight, and the shoe packs were awkward and they made me feel clumsy like I was walking in a sea of glue. This was my first true combat mission, and the physical exhaustion made the possibility of taking an enemy bullet seem like a pleasant alternative to the torture of what appeared to be another Bataan Death March.

Gunny Owens carried two canteens on his cartridge belt with only one for water and his speech was becoming slurred from fatigue as he communicated with the front column. The Gunny asked me to take over the duty on the walky-talky, and no sooner than my first words were spoken, I felt the walky-talky come crashing down on my helmet. Never snapped in on one of these critters before and evidentially my lingo was not up to specification. However, I seemed to improve my rhetoric after my helmet stopped ringing. Barely before sun-up we arrived to the village of Chachon-dong. We proceeded to the police station which was a large building with a watch tower on the roof similar to that of a life guard stand on a California beach. First Lieutenant Schening our executive officer headed a small advance party, and he promptly directed assignments in developing a perimeter around the village with Marines placed in homes to prevent discovery. 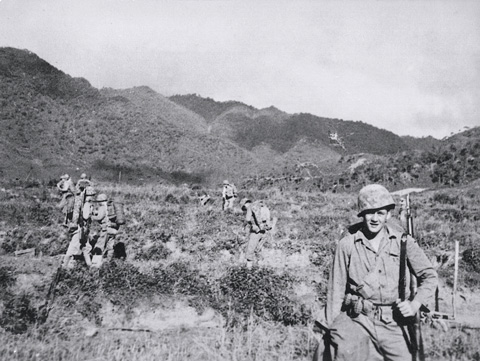 My group consisted of the platoon runners among them was Bill Boyle, and Marvin Wright. Also Whit Moreland our scout and map reader plus a Marine correspondent from division who always wore a red bandanna tied around his neck and he carried a portable Remington typewriter. Along with Gunny, we all stayed in what was said to be the mayor's house. Just a plain stucco construction with thatched roof and hard clay like terrazzo floor. The house was heated by building a wood fire under the foundation. The first night we used an excessive amount of wood and the floor became as hot as clay oven in a Bombay restaurant. We had to sleep on top of our sleeping bags and parkas to prevent being baked. We stayed in the house during the day, and went out only at night to communicate with our various units making up the perimeter. Some of the homes were destroyed by artillery fire from a different battle. Remember we were given a small gas stove to heat our C-rations as a large open fire would likely give away our positions. Also we were given a 5 gallon can of water. Whit Moreland introduced the helmet as an excellent pot to boil the sealed cans of food to get an even heat throughout the can rather than scorching the food on the bottom of the can that often occurs when using an open flame. Not much happened during the first few days at Chachon-dong. Remember buying rice taffy from some of the native children. A few of the Marines enjoyed rice dishes prepared by the locals, but I stayed with my favorite ham and Lima beans as I was not tempted to investigate the Korean Cuisine.

It was around 4:30 AM on Friday when I was awakened by what at first sounded like the staccato sound of my mother popping pop-corn for my little sisters, but instead it was the harsh sound of rapid fire from a light machine gun greeting the arrival of the bad boys from up north. We all hit the deck with dispatch. Threw on our boots and parkas, picked up our rifles and ran on the double to our command post the old police station. Inside the building there was a trap door to the roof and the lookout tower. No sooner than we hit the building the Gunny ordered me to climb to the tower on top of the roof. This would put me in an excellent position to direct the traffic, and also make me a sitting duck for even the enemy's worst marksman. I had a sick feeling that my first combat mission was going to be my last. I proceeded to climb to the roof, but before I could complete the task the Gunny rescinded this order much to my relief. The shooting soon stopped as one of Dick Holbrook's machine gunners chased away the enemy. Our great planned ambush did not destroy the enemy, but our presence prevented death and destruction to this small village at the bottom of surrounding mountains.

On Saturday the people from the hills came to the village and set up a market on the tarmac on the outskirts of town. Small shops were installed to sell trinkets as well as prepared food dishes just like in a group of small restaurants. Remember seeing a mallard duck and a squid on display hanging from a robe line in one of the portable shops. The scene was business as usual, as if no war existed. We left the next day, and found out years later that we participated in the largest planned ambush against enemy that was ever formulated during the Korean War. Soon Charlie Company would be the lead point during "Operation Killer" and would play a major role in defeating the North Korean and Chinese forces during 1951 and help drive them past the 38th parallel. However, I will remember every detail of Chachon-dong because it was my first combat experience, and the terror of hearing the first gun shot in my direction will remain forever.